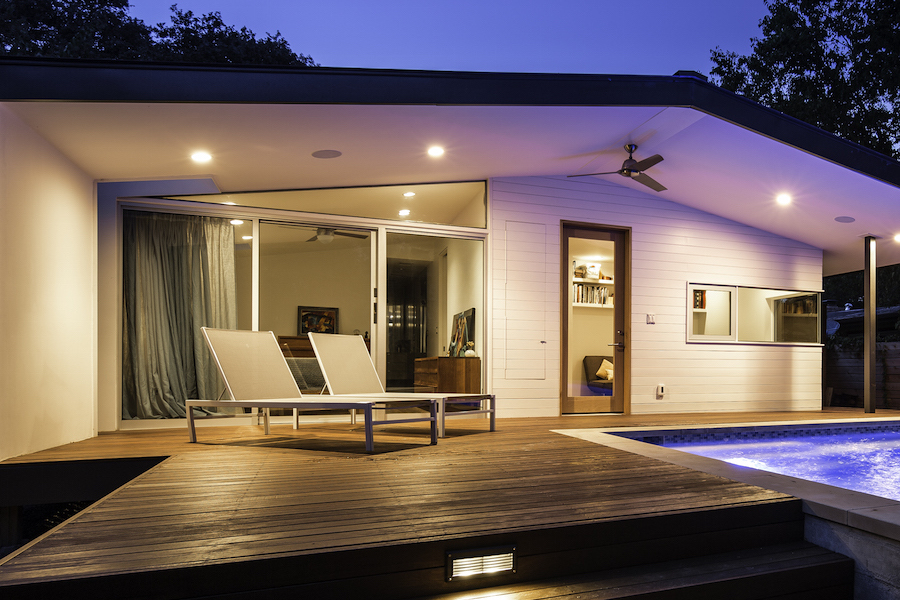 19 Nov Renovation Rx: The Thrill Of An Editor’s Own Modern Home Renovation

Posted at 00:00h in architecture by IDF Editors
Share

After 15 years writing about other people’s house projects, I finally got the opportunity to experience my own, in Zilker. In 2012 my husband Todd and I decided it was time to take our little 1,100-square- foot house (with 300-square-foot converted garage) to the next level. We chose Burton Baldridge Architects for the job. I had known and admired Burton’s work from back in my New York days at Architectural Record magazine, and we had become friends since my move to Austin, but I never dreamed he would take on a renovation project as small as my little house. He did. And with project designer Brian Bedrosian and Garrett Boon of Five Stones Construction as builder, he transformed my house from a small, inefficiently laid out 1955 rambler into a mini modern masterpiece, complete with a backyard we never want to leave, and a front courtyard that incorporates our giant heritage oak tree (and my seven-year-old son Dash’s swing!) into our living space with the swoosh of a sliding glass door.

We loved the house when we bought it in 2005, but became frustrated with the flow of spaces, including the garage, which was separate from the house, and had been poorly converted to a storage and laundry room. Also, we longed to be outside but there was no good access to the spaces, and they were unshaded and uncomfortable. Burton, Brian, and Garrett realized the potential of the house and the outdoor space around it, and renovated it in such a way that it feels united, voluminous, harmonious, and alive.

ANOTHER FAVORITE: Let’s Talk About Modern Architecture in Zilker

“I always loved your house and wanted to respect it,” says Burton about the unassuming street profile and angled roof that remained similar to what was there before. Unassuming but refined, as the new design adds a modern, Jetson-like feel, with steel beams supporting an extended canopy over the courtyard, and a dark gray standing-seam metal roof that folds down to clad the south side of the house. It looks effortless, but the engineering is complicated. “The roof in several locations is supported by a double or compound cantilever,” says Brian. “Besides being really cool, it changes how you perceive the roof—gives it less physical weight and opens up the space to what is beyond.”

Inside, strategically placed windows frame views and bring in natural light, including a skylight that creates an ever-changing light show against the bedroom wall. There’s also a straight view from the front of the house all the way down the hall out to the pool—a view of flowing water that dapples and dances in a reflection above on the white overhang right outside the back door.