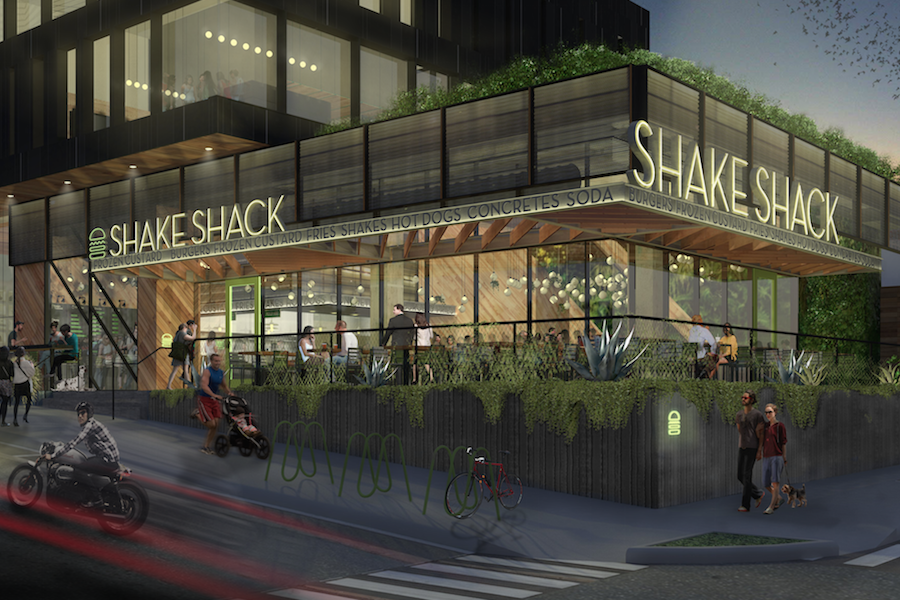 Posted at 16:00h in lifestyle by Ingrid Spencer
Share

As a Zilker resident, I’m one of those looking forward to what’s coming to town. A developer with vision, Greystar, selected two thoughtful architecture firms for the massive Lamar Union on Treadwell and S Lamar, Boka Powell as executive architect and master planner, with Michael Hsu Office of Architecture as the collaborating design architect. While the development replaces beloved Zilker businesses such as Hennig’s Heart of Texas Music (where I bought my son’s ukulele years ago!) and Big Bertha’s Bargain Basement vintage shop, with 443 modern rental apartments and over 80,000 square feet of ground-floor restaurants, retail, and parking, I am not afraid. In fact, I am thrilled.

YOU WILL ALSO ENJOY: Let’s Talk About Modern Architecture in Zilker

With the Alamo Drafthouse and the Highball lounge anchoring the project, and four new restaurants including the Michael Hsu-designed Shake Shack, and Cantine, Lamar Union promises to be a walkable, well- designed destination for the neighborhood. Eric Van Hyfte, a senior associate with Boka Powell, showed me the bike paths that run all around the development, as well as the ground floor apartments on the Southside, which have doors that open to the street, making them look and feel more like modern townhomes than traditional apartments. “We really want Lamar Union to be a model for residential infill mixed-use,” he says. Michael Hsu, who worked with Boka Powell on many of the design details, agrees. “This project used some real programming best practices,” he says. “The developer was a real partner in making sure that the clients are appropriate to the neighborhood first, then allowing them to express their individuality.” Michael is helping that effort, bringing his expertise in restaurant design to Shake Shack and Cantine, the new restaurant by Emmett and Lisa Fox of Asti and Fino fame, their own identities.

Michael, who is also designing a house in the area, says he’s proud to be bringing density to Zilker, and has come to have a real affinity for the area. “It’s hard to find another place in Austin like it,” he says. Still, he cautions against the provincial mindset that is still prevalent in Austin. “It goes back to the old estate mentality,” he says. “But we’ll keep trying to convince those people that with responsible design a variety of levels of development can enhance their neighborhoods.”

This article was originally published in the 2014 Interiors Edition of VETTA Magazine.

Before moving to Austin in 2004, Spencer began her design career in New York as the Managing Editor of Contract Design Magazine, and then Architectural Record. In her role as Managing Editor, Spencer discovered her love and appreciation for architecture of all types, and she hasn’t left the design world since. Upon moving to Austin, Spencer continued writing for Architectural Record as a contributing editor, curated the Austin Modern Home Tour for seven years and engaged with a number of Austin architects and landscape architects through the Waller Creek Conservancy’s Creek Show installation series.