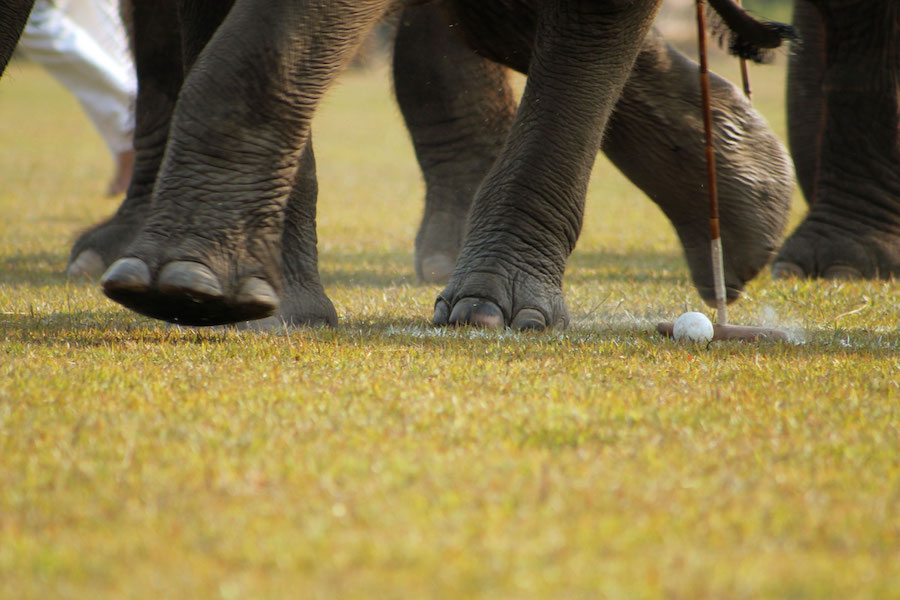 I was introduced to this sport by my friends at The Elephant Story, a wonderful and whimsical venue in Comfort, Texas dedicated to wildlife preservation and whose owners are deeply driven by their love of animals. They are so passionate, in fact, that the store is the only

The World Elephant Polo Association (WEPA) was formed in 1982 at Tiger Tops Jungle Lodge, in the Chitwan National Park in southwest Nepal. The first games were played on a grass airfield in Meghauly, located on the edge of the National Park. The co-founders, James Manclark, a Scottish landowner and former Olympic toboggan racer, and Jim Edwards, owner of Tiger Tops Jungle Lodge and Chairman of the Tiger Mountain Group, came up with the idea in a bar in St. Moritz, Switzerland, where they were members of the Cresta Club.

RECOMMENDED: Black Ivory Coffee: The Rarest Coffee In The World Is Sold Exclusively At The Most Unexpected Place

The original elephant polo matches took place in India around the turn of the 20th century by the members of the Maharaja’s Harem (Zenena) to keep them busy. WEPA is the first paramount organization in modern times to host and create elephant polo as a game with organized competitions. The game is played with a standard polo ball. The sticks are made of bamboo and have a standard polo mallet on the end. The length of the stick depends on the size of the elephant but range from 74 inches to 100 inches, up to twice the length of a horse polo mallet.

The Super Bowl of Elephant Polo, meanwhile, is the annual King’s Cup Tournament, which has been sponsored by Anantara for over a decade years. Equal parts improbable game, nonstop party and serious fund-raiser, the tournament delivered on all the promises the founders—polo players, philanthropists and sports fans—made when they dreamed up the sport back in the late ’90s.