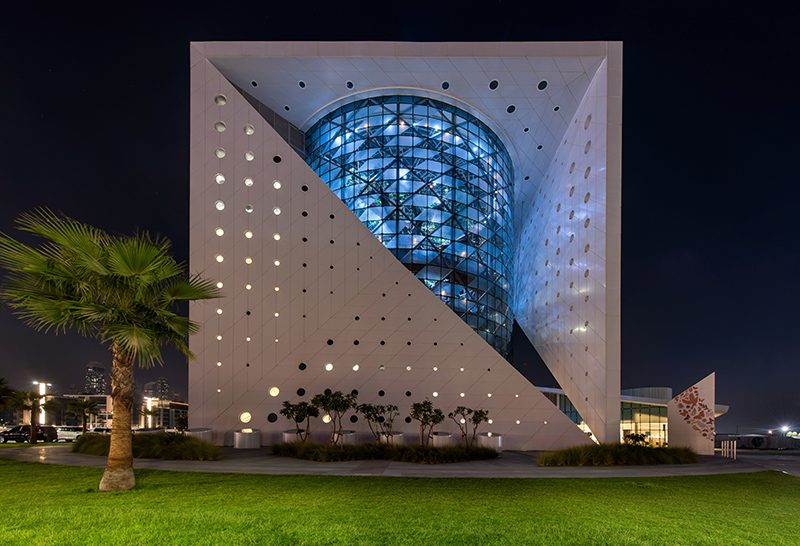 Posted at 00:00h in architecture, sustainability by IDF Editors
Share 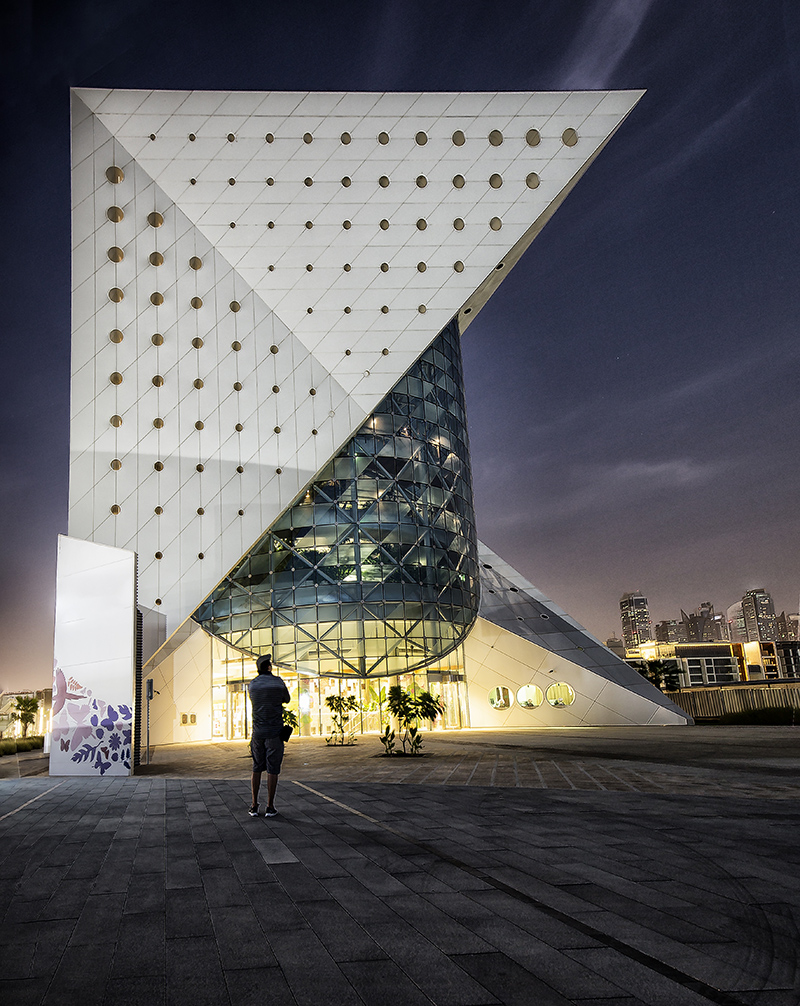 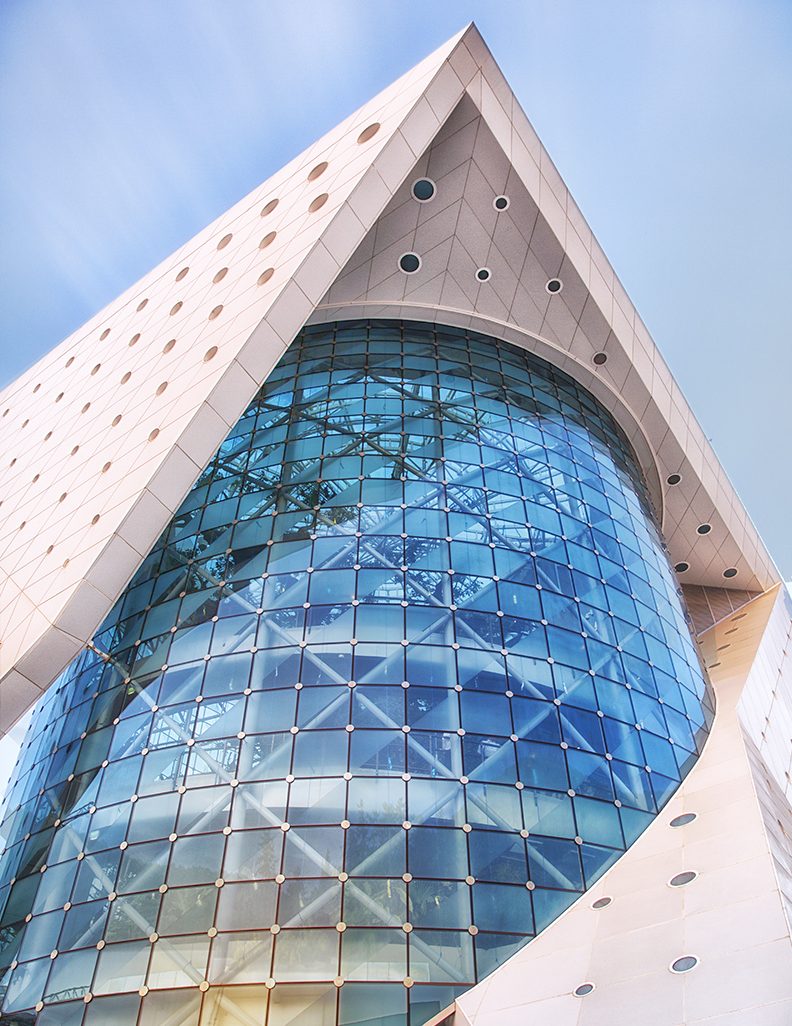 Building an indoor tropical rainforest requires special architectural consideration. How does one design a man­made tree that can sustain wildlife? How can that tree be housed within a larger structure? What systems and materials can provide and withstand the constant high temperatures and humidity required by tropical plant life? Canadian architects Brad McTavish and Clive Grout of Grout McTavish encountered these challenges, amongst a plethora of others, as they designed The Green Planet, a living indoor rainforest and educational attraction in Dubai. 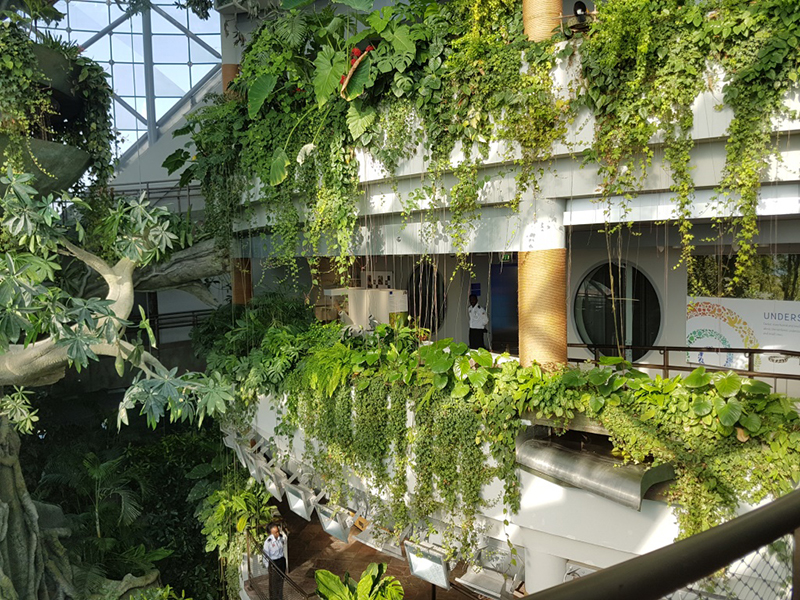 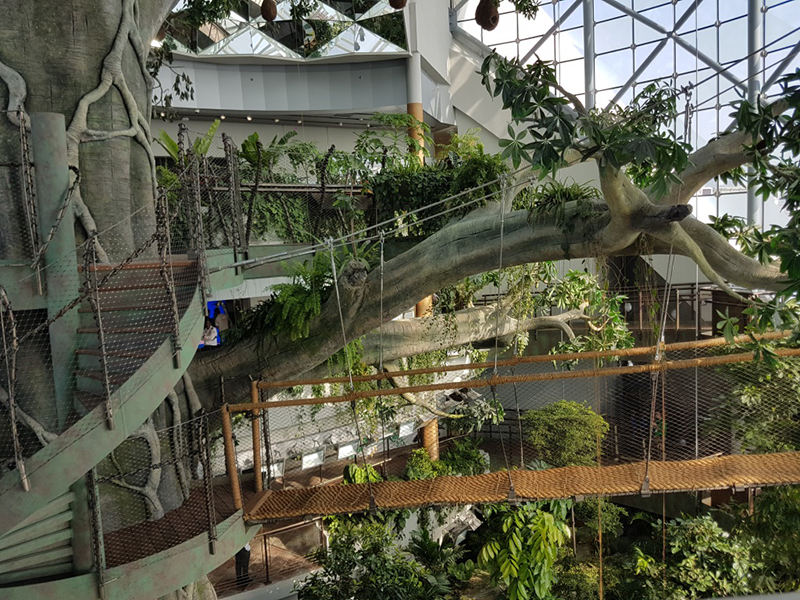 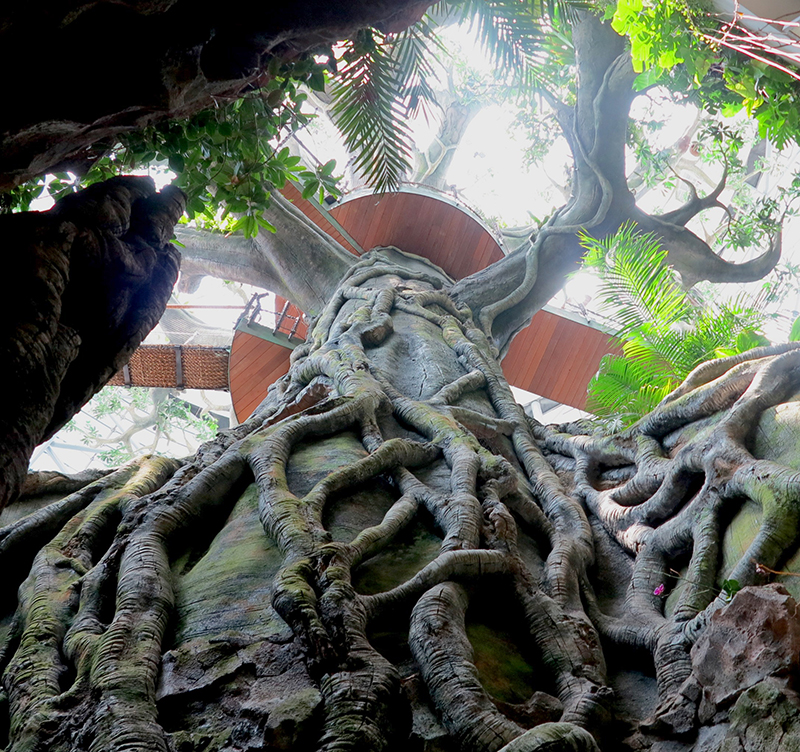 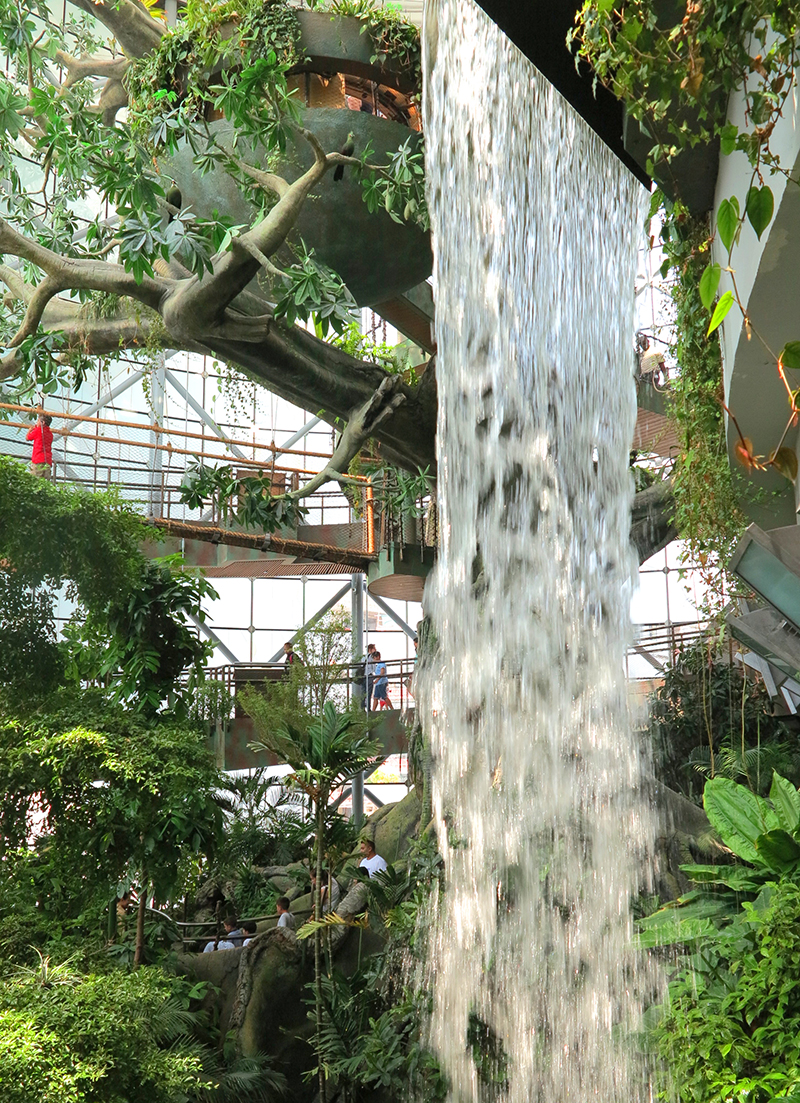 Encased within a 98′ origami­like glass cube, The Green Planet is comprised of four floors (plus two below­grade spaces) that encircle an 82-feet-high life­sustaining tree — the largest indoor man­made tree of its kind. Visitors enter the bio­dome at grade level, into a mossy flooded rainforest floor where a giant aquarium containing stingrays, freshwater turtles, and arapaima is installed. A winding path takes patrons alongside the periphery of the tree and up to the very top of the building, offering a panoramic view of the forest; along the way, wildlife, like South American toucans and crocodile lizards, can be spotted nesting amongst the greenery. 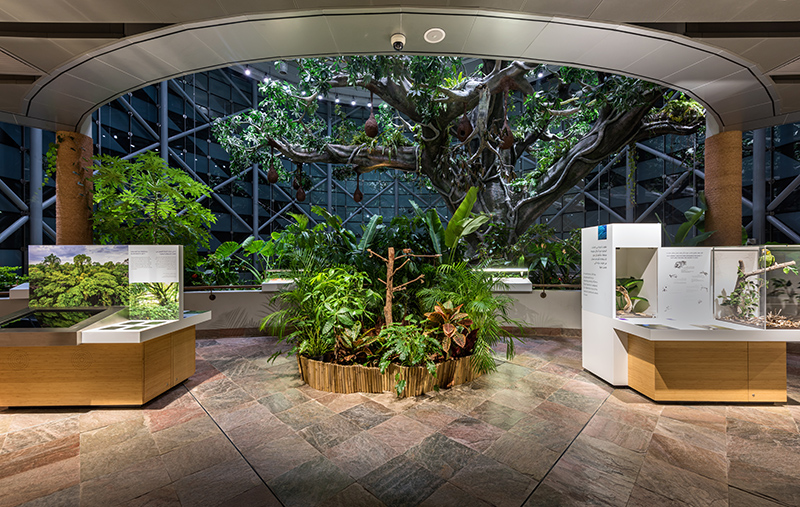 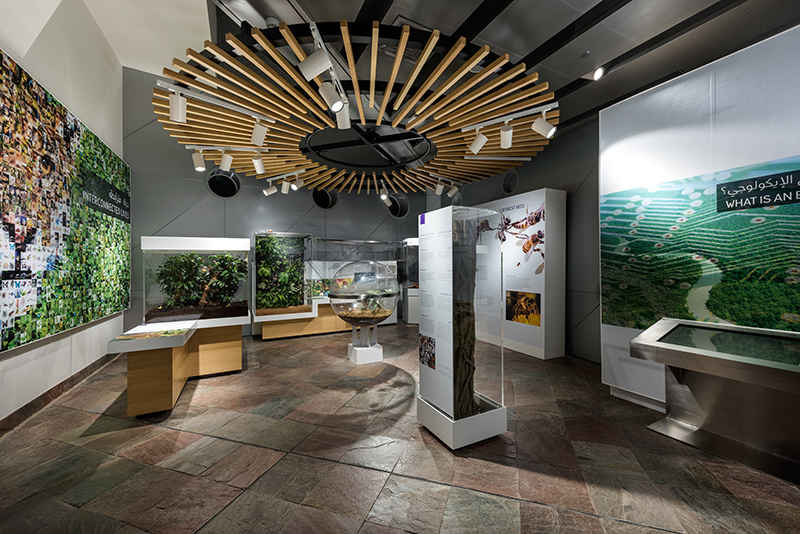 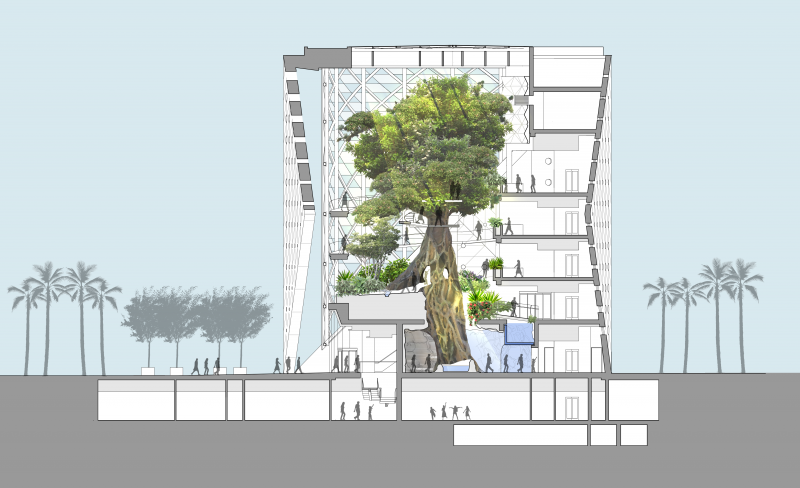 Between the launch of the project in May 2013 to the completion of construction at the end of August, McTavish and Grout made 15 trips to Dubai and worked with a team of 55 people, including horticultural, habitat and zoological experts. The nature of the project – creating an aesthetically pleasing, user­friendly space that would sustain animal and plant life – required a design process unlike any other the architects had ever undertaken.

“We had to create a real ecosystem,” McTavish says. “Most architects never even consider what interactions and supporting infrastructure you would need to create to foster a symbiotic relationship between the form of the architecture, its orientation and the species and the plants that needed one another.” Those considerations informed many key design decisions. Because maximum UV light was needed to feed certain
species, the architects were unable to apply standard glazing, which blocks much of the sun’s rays from penetrating. A traditional supply­and­return air ventilation system was also out of the question since the bio­dome’s more than 5,000 butterflies wouldn’t be able to tolerate high air velocity. Instead, a special, low air supply system was designed.

“Nature demands a different design approach and the mechanical and architectural design was an exercise in listening to nature and how best to employ systems and architecture to support the natural environment we were creating,” McTavish explains.

“As I described to fellow architects, the primary directive was to make a living machine whereby the research, design, and architecture becomes background to the species that make The Green Planet home. It’s akin to an art gallery that disappears, and the art becomes the forefront of the experience.” 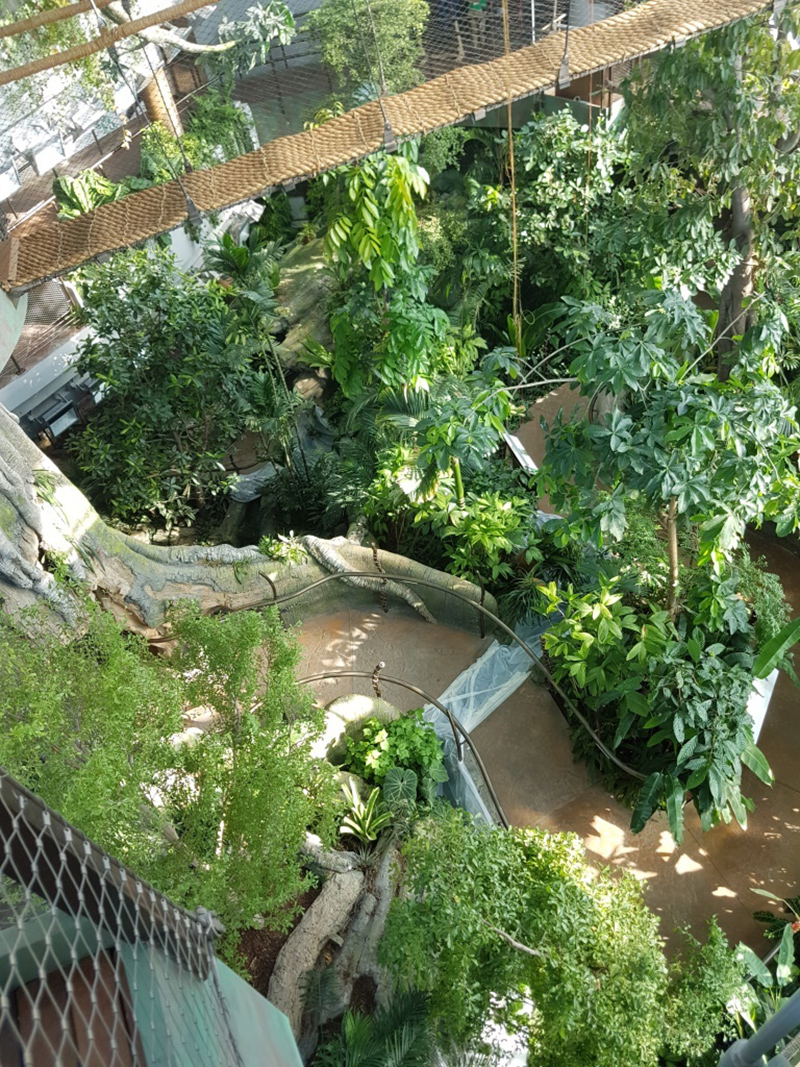 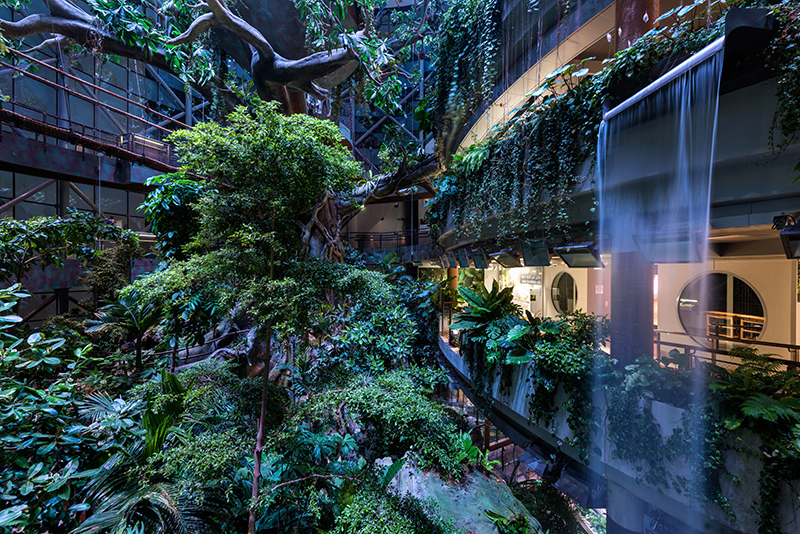 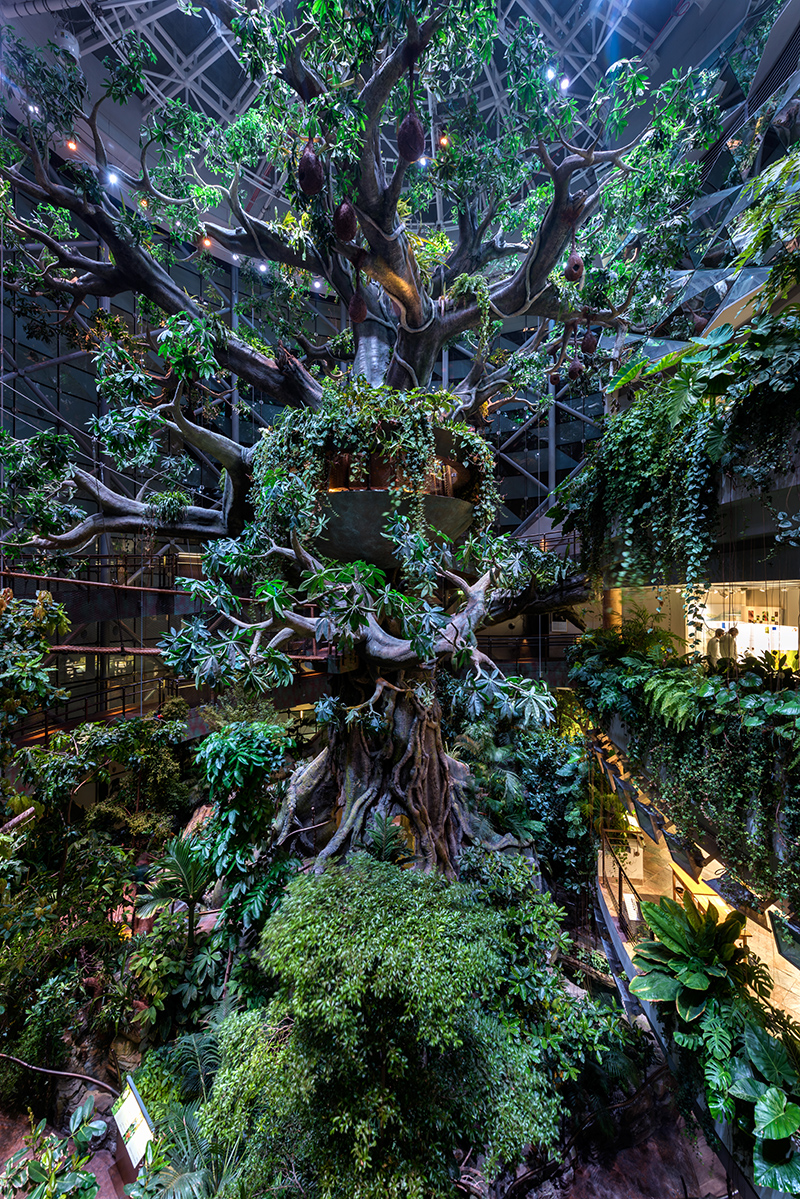 Design and architecture may be a backdrop inside the bio­dome, but such is not the case with its bold exterior. From the ground, the rainforest appears contained within a glass volume emerging from the folds of a sharp Fujimoto origami cube. McTavish describes it as a “jewel­like cylinder, shielded and protected by a fragile enclosure that contains a living machine able to sustain life within the desert.” During their design process, McTavish and Grout reflected on the threats facing the planet and how that might be reflected in architecture. They also considered the location of their project; Dubai’s desert landscape is inhospitable for much wildlife, and yet they needed to create a hospitable, permanent environment for rainforest species. “The architecture was developed around an earth­inspired circle containing a tropical garden, that is protected by a fragile origami cube representing the weak nature of our permanence on earth,” McTavish explains. “The perforated and dissected cube houses the environmental ideal, shrouded and exposed, offering the passerby a glimpse of a world we all need to protect for our mutual survival.”